jclovetronic
Home
/
What to Do
/
Activities

Tapalpa: A Small Town Nestled in the Mountains 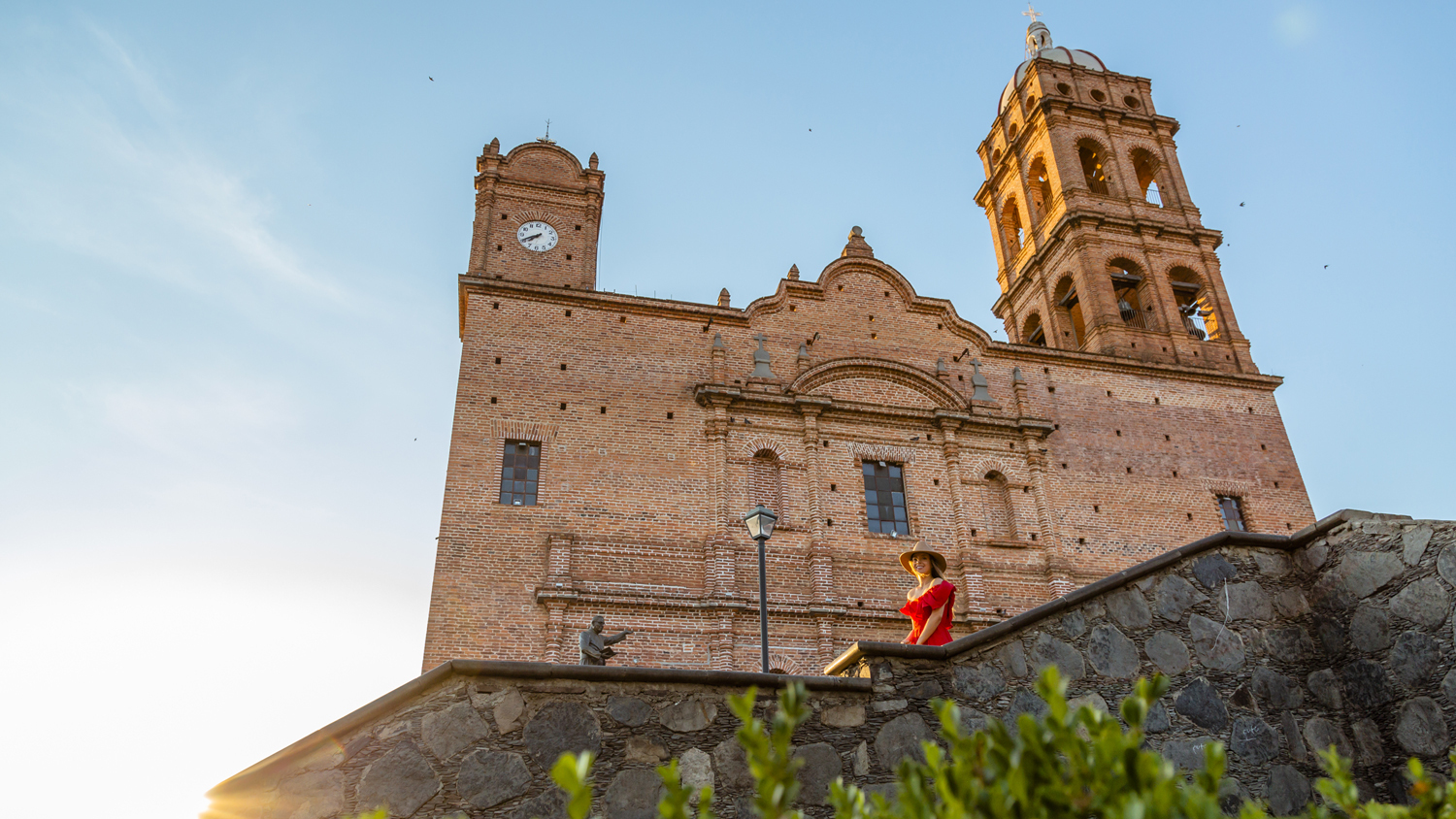 As you walk along the cobblestone streets of Tapalpa, designated Jalisco’s first Pueblo Mágico (Magical Town) in 2002, you’ll notice its architectural legacy, a clear example of the coexistence of the different cultural expressions of a town that has known how to value and preserve its past, to share with all who visit.

Since you’ve already accompanied us to become familiar with Vallarta · Nayarit’s different parts and micro-destinations, on this occasion we wanted to delve into iconic places near Guadalajara, so the Vallarta Lifestyles editorial team took this journey to discover, explore and get to know this historic small town set in the Sierra Madre Occidental.

There are several routes from Puerto Vallarta to this land of colonial heritage and unique scenery, each with its own special characteristics. The easiest way is to head to Guadalajara and then take the highway to Colima, which will lead you to Tapalpa. A second option, one that will put you in tune with the forested surroundings, is to drive past Mascota, taking the route toward Volcanes, and then continue to Chiquilistlán, which eventually will lead to the magical town. A third way, ideal for adventurers who have all-terrain vehicles, is to take that same route, but turn off at San José de Ávila and continue up through San Gabriel.

Houses and Buildings: Centuries of Wealth and History 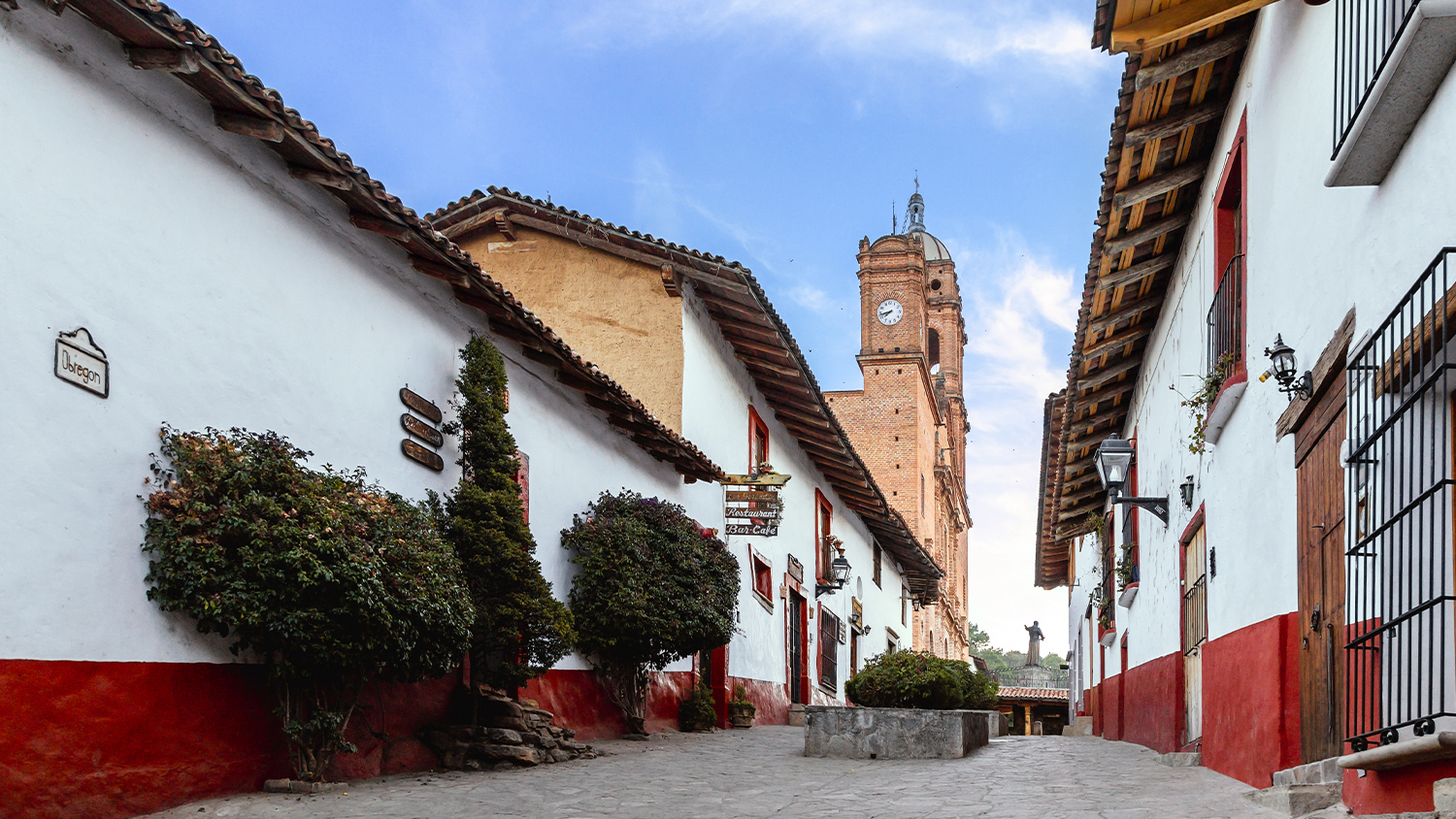 Once in Tapalpa, whose name comes from the Nahuatl word “Tlacpacpan,” which means “land of color” or “place located on high,” we note the tranquility of the streets leading to the main square, a meeting place for residents and visitors that is adorned with a beautiful kiosko built between 1906 and 1907, to be ready to commemorate the centennial of Mexico’s independence. As we walk through it, we notice its gardens and old-fashioned structure, surrounded by traditional stately houses and doorways guarded by columns.

Here is the town’s historic center, where you can appreciate the dynamism that now exists in what once was the Hacienda Casa Verde, a large estate that belonged to Don Vidal Vizcaíno, the principal driving force behind Tapalpa’s establishment as an independent entity, since it initially belonged to the Cantón de Sayula. Thanks to his efforts, it was registered as a town in 1838, and in 1844 it was established as a municipality.

On the other side of the square you will find the Parroquia Antigua de San Antonio, built by Franciscan monks in 1682. Although its design and construction didn’t include steel structures, it has a half-barrel vault, and the floor is original mesquite wood. Currently, it is a museum of sacred art that also functions as a space for cultural exhibitions. Facing it is the Parroquia Nueva de San Antonio, which was built in 1940. In addition to being consecrated to Our Lady of Guadalupe, its distinction is that it is made of exposed brick both inside and out.

Other sacred buildings include the Capilla de la Purísima (formerly the Iglesia de la Cofradía de Indios, which, together with the novitiate and hospital, formed a social assistance complex) and the neoclassical-style Nuestra Señora de la Merced, with Baroque details.

It is noteworthy that the traditional houses built during the economic boom, belonging to the first half of the 19th century, along with the paper factory called Constancia de Santa María de Guadalupe, are still preserved and inhabited. 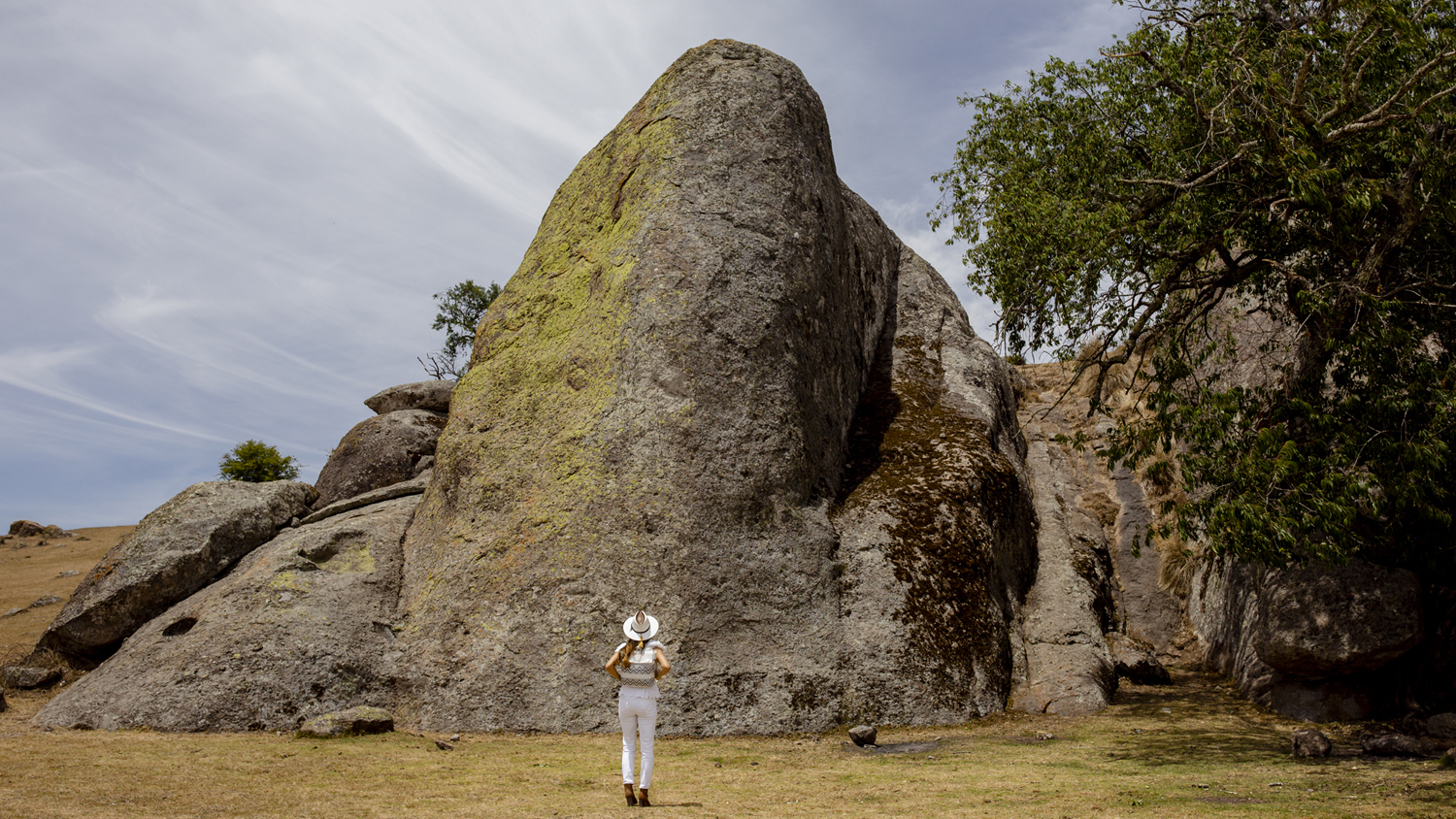 Without a doubt, Las Piedras (popularly and locally known as Las Piedrotas) is one of the first places to visit in Tapalpa. It is located about three miles from town, and you take the exit that goes to Chiquilistlán to reach it. The name refers to the large number and immense size of several groups of boulders set in an impressive valley that you can tour freely. Although it is hard to imagine their origin or source, it is believed that this area was once an ocean that dried up millions of years ago, leaving the boulders exposed.

For the more adventurous, about nine miles down the road to La Lagunilla, you will find the Cascada Salto del Nogal, an outstanding double waterfall whose 335 feet make it one of the highest in Jalisco. To reach it, it is necessary to take an extreme hour-long hike along the mountain, through a forest full of pines and oaks. The scenery you can admire from the many points available to observe it will impress you.

Other natural attractions include La Peña Rajada, located about 12.5 miles from the town of Juanacatlán, where you will be surprised by the beautiful landscape comprising the Laguna de Sayula, the Volcán de Colima and the towns of Tepec and Amacueca. And at La Presa del Nogal, located three miles down the road to Venustiano Carranza, you can camp and practice sport fishing. Finally, at La Piedra Balanceada, located in the town of Juanacatlán, you can take a spectacular souvenir photo. It should be emphasized that all these attractions possess incomparable scenery. 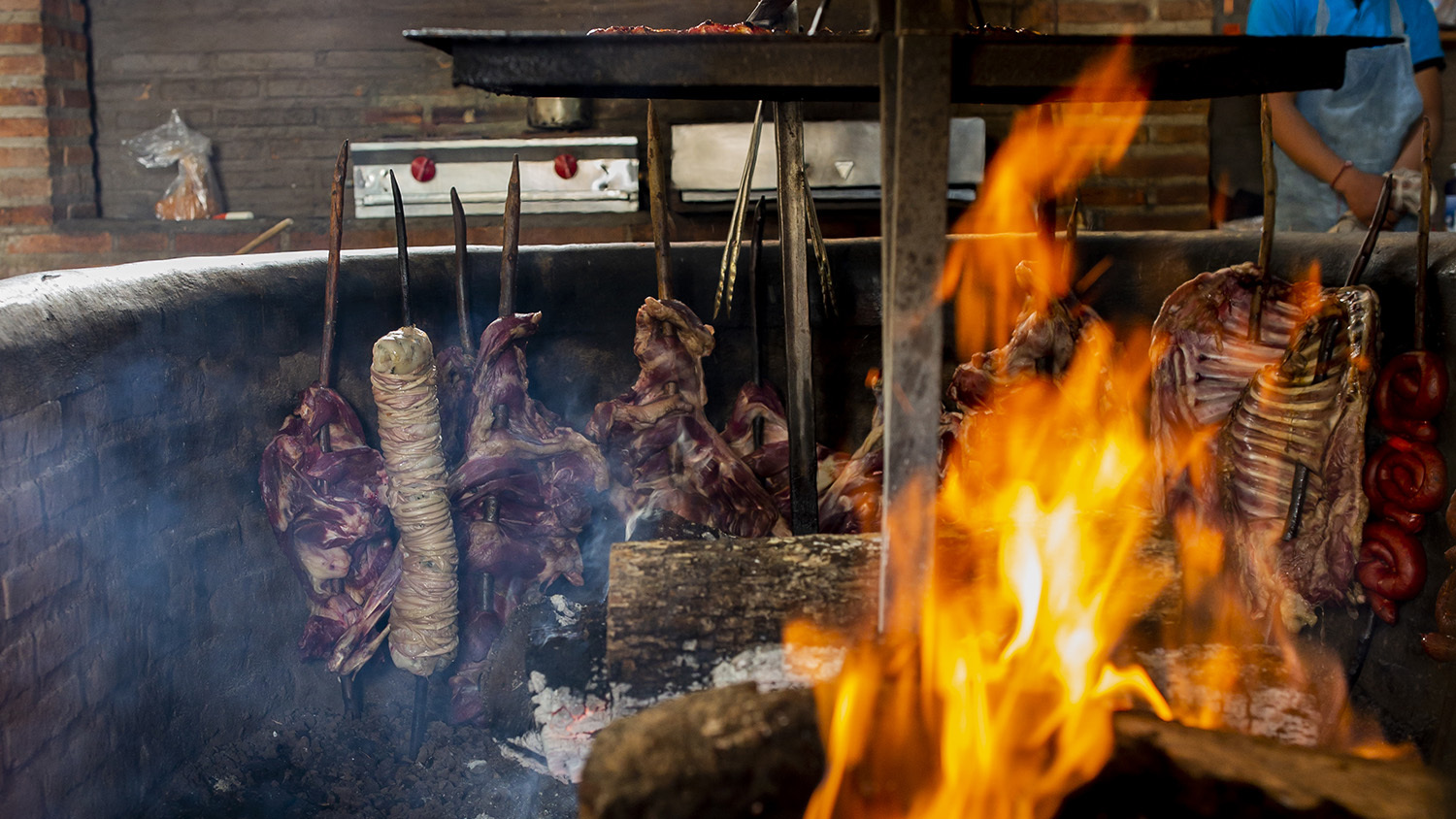 Following a very active day visiting some of Tapalpa’s attractions or touring its streets, the best way to restore your energy is with a lunch or dinner replete with colonial heritage. On the outskirts of this magical town, several roadside restaurants offer the area’s specialty: Borrego al Pastor. A protein rich in fat, the lamb is bathed in adobo sauce and cooked directly over the coals, on a thick piece of mesquite to help smoke the meat. Fusing the corn dough of pre-Hispanic fare with ingredients from European cuisine, the Tamal de Acelga is another typical dish, which can be found in various establishments around the main square.

Ideal items to take back home include rompope, a regional drink made from milk, egg, vanilla, sugar and alcohol, with bits of pecan added; fruit punch; and typical sweets such as jams, jamoncillo, cajeta and fruits preserved in syrup. If you are looking for something even more special, you will find several boutiques in the downtown area offering clothing and home decor items you might also consider.

Where to Stay: Luxury and Comfort in the Mountains 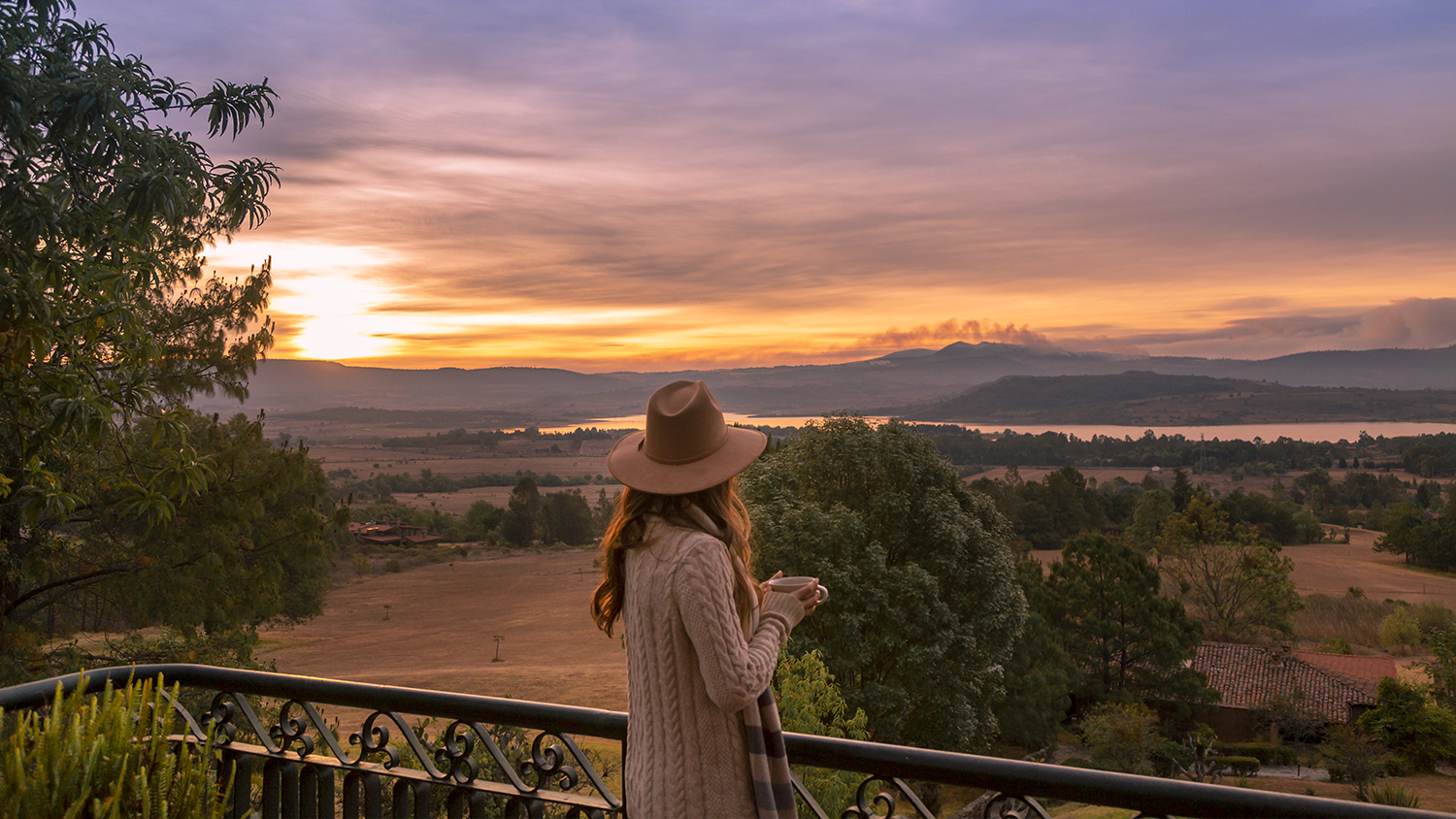 While it is true that this magical town has multiple lodging options, the most outstanding places to stay are the authentic wood cabins and the converted old houses, one of the most special being the Tapalpa Country Club Hotel. Located on the outskirts of town, its distinctiveness lies in its rooms distributed on a slope with a panoramic view of La Presa del Nogal, as well as the Volcán and Nevado de Colima. Since it is a very tranquil area, within a low-density development, it offers amenities such as a restaurant, bar and meeting room, among others.

Since every trip has an end, when it’s time to return to Vallarta · Nayarit, you will surely think, “See you soon, Tapalpa,” while recalling and forever preserving in your memory the scenery, gastronomy, buildings and agreeable climate of this wonderful town situated in the thick of a vibrant forest.

“Ellas se Juntan”: Female Chefs Offer a Dinner with a Cause

On July 16th, 2022, Los Toneles restaurant will host an event that brings together seven of the best female...
Jorge Chávez
493 views
Events