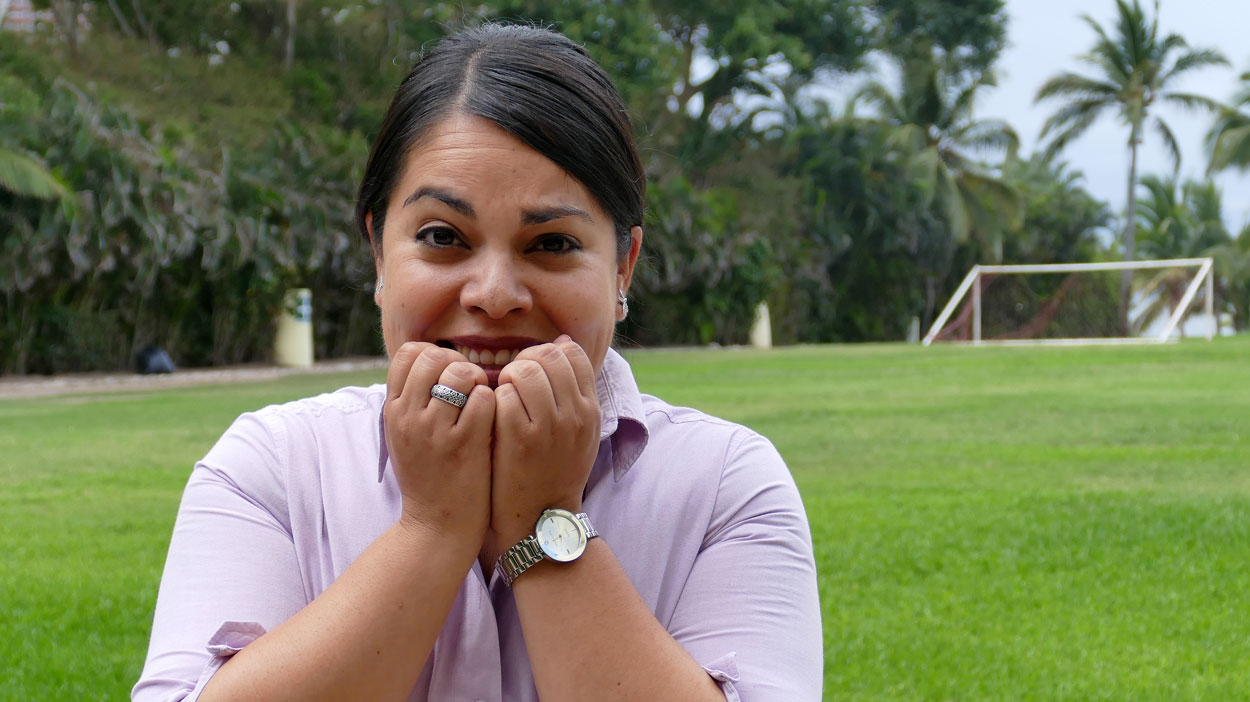 The upcoming Twelfth Annual Altruism Festival is still a month away, and coordinator Lourdes Bizarro is already feeling the heat. “Restaurant participation deadline is today, and we are still waiting for a few agreements to fall into place,” she explains. “We’ve been going at this for two months.” The phone rings. She apologizes, and the day is just beginning for the CasaMagna Marriott Puerto Vallarta Resort & Spa Public Relations Director, who, on top of all her usual responsibilities, gets to oversee Puerto Vallarta’s most gargantuan and successful annual fundraising event. “This is the hobby,” she chuckles. The phone rings again.

The Altruism Festival was envisioned well over a decade ago by US Consular Agent Kelly Trainor and Dennis Whitelaw, who was general manager at the Puerto Vallarta Marriott for 15 years, and is now overseeing five properties in Costa Rica for the prestigious hospitality brand. With a long friendship and a shared, deeply rooted commitment to improve Puerto Vallarta and surrounding areas in any way possible, they envisioned an event in which local non-profits could not only receive a financial benefit, but also an event large enough to allow the organizations an opportunity to reach and connect with a captive audience: Puerto Vallarta full- and part-time residents. People have to eat, so restaurants had to be involved during the event. Then there was the issue of a venue large enough to hold a large number of people, and the Marriott stepped in to the task. Voilà, the Alturism Festival was born. 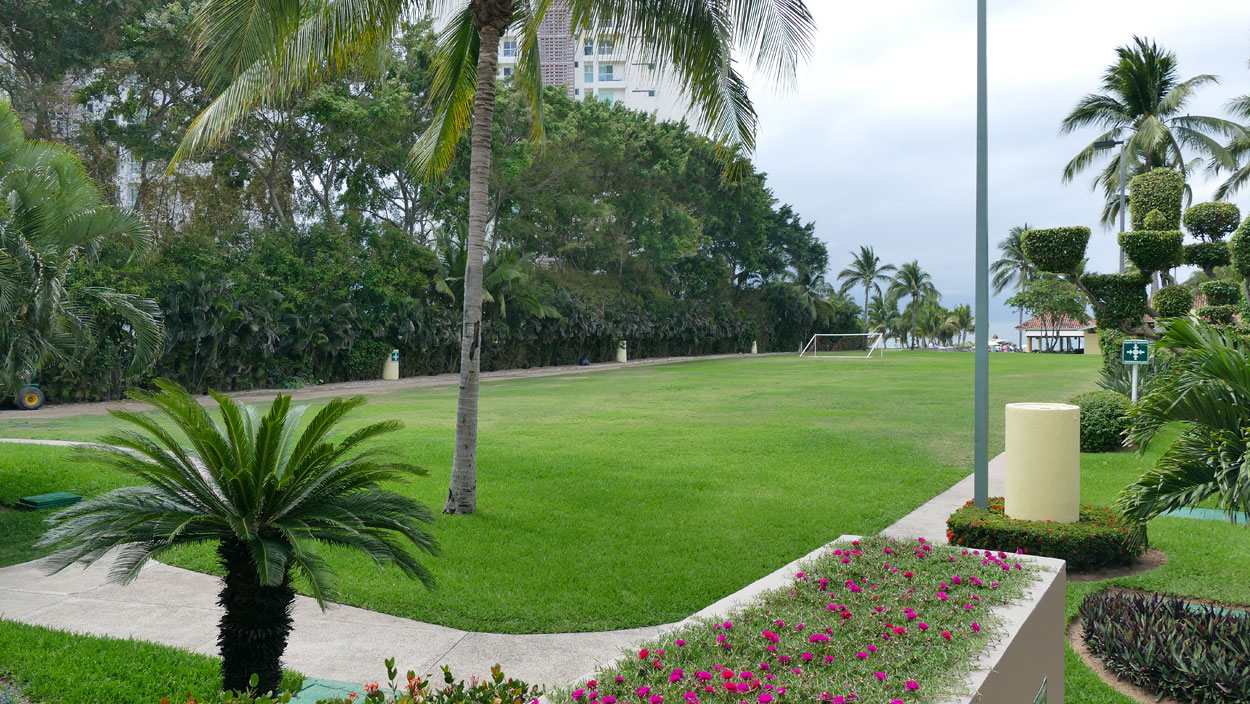 Calm before the storm. The Marriott’s spacious garden, where the Altruism Festival takes place year after year.

A charitable event like no other in the region, and possibly all of Mexico, the Altruism Festival’s formula is simple: during one evening—usually in early May—an average of 1200 ticket holders arrive at the Marina Vallarta hotel and are efficiently directed to it’s beautiful, carefully-manicured garden. Twenty pre-selected local charities have information booths neatly organized under tents around the garden perimeter, along with 40 or-so local restaurants, who have committed to bringing, preparing and serving 400 samples of some of their popular dishes each to those present. A handful of beverage companies (wine, beer, and so forth) follows suit.

The event relies on Facebook and other social media outlets for promotion.

Attendees pay $400 pesos per person (advance purchase, $500 pesos at the door) and enjoy the aforementioned amenities, plus live performances, auctions and other recreations, along with the opportunity to visit the charity booths of their choice to learn more about their projects, goals, and ways to get involved. When the event is over, all monies raised, that is, 100 percent—approximately $700,000 pesos last year—are divided equally among participating charities, who receive not only the financial benefit, but also the possibility of new volunteers and future donations from individuals, if they play their cards right.

It looks rather simple on paper. In practice, however, the responsibility of making all of this happen, at a supervisory level, year after year, falls on Lourdes Bizarro’s shoulders. Many others, from Marriott employees to faithful volunteers, are there to lend a helping hand at all times, however, including Kelly Trainor, who has remained indispensable to the event from the get-go. “Most of the staff at the hotel has been with us for many years,” explains Lourdes, a ten-year Marriott employee who has directly overseen the Altruism Festival for the past seven years. “Somehow, this gives me peace of mind as I am confident that everyone, from waiter teams, banquet specialists, event organizers and security, are all eager and ready to go.” Along with her, 15 heads of staff at the Marriott, each with their own crews, get involved in not only executing the festival, but also in planning it, a process that begins every January with the event date confirmation.

All monies raised, that is, 100 percent, are divided equally among participating charities, who receive not only the financial benefit, but also the possibility of new volunteers and future donations from individuals, if they play their cards right.

Aside from being one of Puerto Vallarta’s finest Gran Turismo hotels, the CasaMagna Marriott Puerto Vallarta Resort & Spa specializes in large conventions and groups. Given the space, logistics and staff requirements of the event, it would be next to impossible for the Altruism Festival to take place concurrently with any other important convention at the hotel. Traffic through the hotel lobby on the day of the event is enough to give this matter some serious consideration: 1200 attendees, 40 restaurants and their crews of 3-5, 20 organizations and their volunteers (4-6), hotel staff, musicians and talent, and let’s not forget regular hotel guests who happened to book a relaxing vacation on that particular weekend!

“January is a good time to obtain an accurate forecast of the hotel’s reservations and group sales for May, and still allows time to execute the festival,” she comments. There are also those guests that, due to past personal experiences or word of mouth, request reservations specifically on the weekend of the event. “Every year, an increasing number of hotel guests look forward to participating, even if they are not familiar with the non-profit organizations.”

With the date set in stone and the entire weekend locked at the hotel as far as other possible conventions are concerned, convening the non-profits follows, along with the non-profit organization selection. This is no walk in the park, considering the enormous bureaucratic and accounting hurdles any non-profit in Mexico must endure to obtain and maintain official status in the eyes of Mexican authorities. To pre-qualify for the Altruism Festival, interested non-profits must have been operating in good legal and fiscal standing in Vallarta for four years. They must also provide evidence of their ongoing projects during that time, and commit a number of volunteers to get involved before, during and after the event. Given that, you’d think that organizations that successfully participated in last year’s Altruism Festival have carte blanche to return the following year. Think again.

“We are sticklers for punctuality and expect non-profits to partner with us as we aim to conduct our business in the most professional way possible,” she explains. A number of meetings with the non-profits are scheduled, for which their representatives are expected to show up on time. Subsequent training sessions are also scheduled for organizations once they are chosen, so they can obtain the necessary skills to effectively engage the public and convey their mission and goals during the event. All volunteers must check in and check out of their assigned tasks and locations at all times. So, even if an organization’s track record and legal paperwork check out, one late arrival to any meeting at any time by any representative of a given organization, or absence on behalf of a volunteer, is enough to jeopardize its standing for the following event. For this year’s upcoming event, for example, five returning organizations had a perfect score, so they were reaccepted automatically. The rest had to go through a draw. “We received a total of 25 applications, and five organizations were turned down because they failed to fulfill some requirements. In the end, we look for a certain level of discipline and commitment from all involved so the event will flow as effortlessly as possible.”

There was that year in which an ice cream and cake provider was inadvertently positioned on the sunny side of the garden—bad idea.

Restaurants involved require just as much planning and hand holding, even if they have participated previously and already know the drill. Some may require electricity (110v or 220v, or both) or will be using gas tanks, a safety consideration as their locations around the garden are determined. Constant follow-up with restaurants is essential throughout the entire process when you consider staff turnover in the industry—if a manager is replaced, for example, the replacement may not even be aware of the commitment the restaurant has already made to participate. 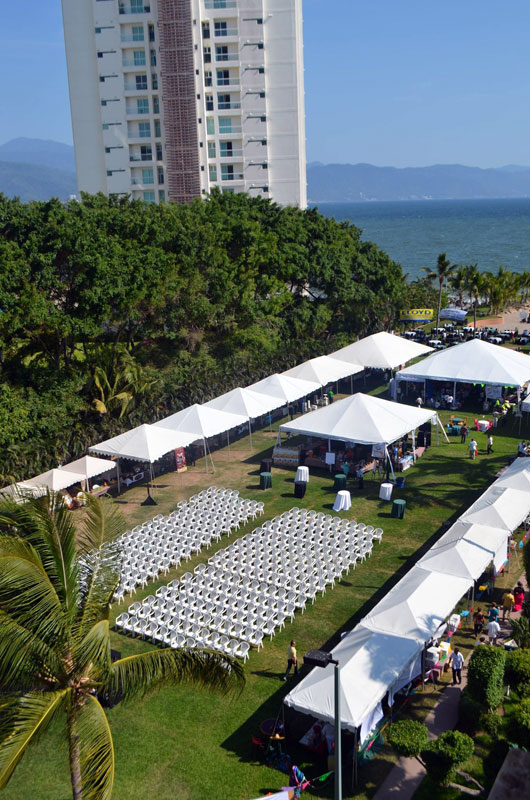 T minus one hour. The stage is set for last year’s Altruism Festival.

One month ahead of the event, everyone is—or should be—already in overdrive. Once all restaurants have been confirmed, it is time to design and produce posters and other promotional materials. Performers and entertainers are lined up. Participating organizations also line up their volunteers, and are expected to sell a minimum of 60 each, depositing the proceeds directly into their official accounts. Grupo Chalita, an important event planning partner, gets involved at this stage donating much-needed tents and awnings. The food and beverage staff at the Marriott has already begun increasing their daily ice cube production, storing the surplus in the hotel’s storage freezers in preparation for D-Day, while their events staff readies over 1,000 plastic chairs, 80 tables, tablecloths and so forth. Two days prior, registered hotel guests receive invitations to purchase tickets and attend via housekeeping. Did we mention that all these efforts, teamwork and collaborations—restaurants, volunteers, performers and such—are completely voluntary? The phone rings again.

For Lourdes and her teams, the Altruism Festival brings every year precious opportunities to learn from mistakes or unexpected situations and improve. There was that year in which an ice cream and cake provider was inadvertently positioned on the sunny side of the garden—bad idea. Or the time in which they ran out of paper napkins. And what about that one year in which an unexpected ant population growth in the garden was not anticipated, to the chagrin of guests who complained of constant bites. “Now we fumigate the grass several times prior to the event—another lesson learned,” she muses.

At first glance, on the day of the event, one might easily deduce that the Altruism Festival is a social event about eating and greeting, but this is definitely not the case. “We want people to enjoy the food and have a good time,” says Lourdes. “But what is truly important here is to enjoy the one-of-a-kind opportunity to connect with some of the region’s most important charitable organizations, and get involved with them in the future, keeping the culture of giving alive and thriving in Puerto Vallarta.” 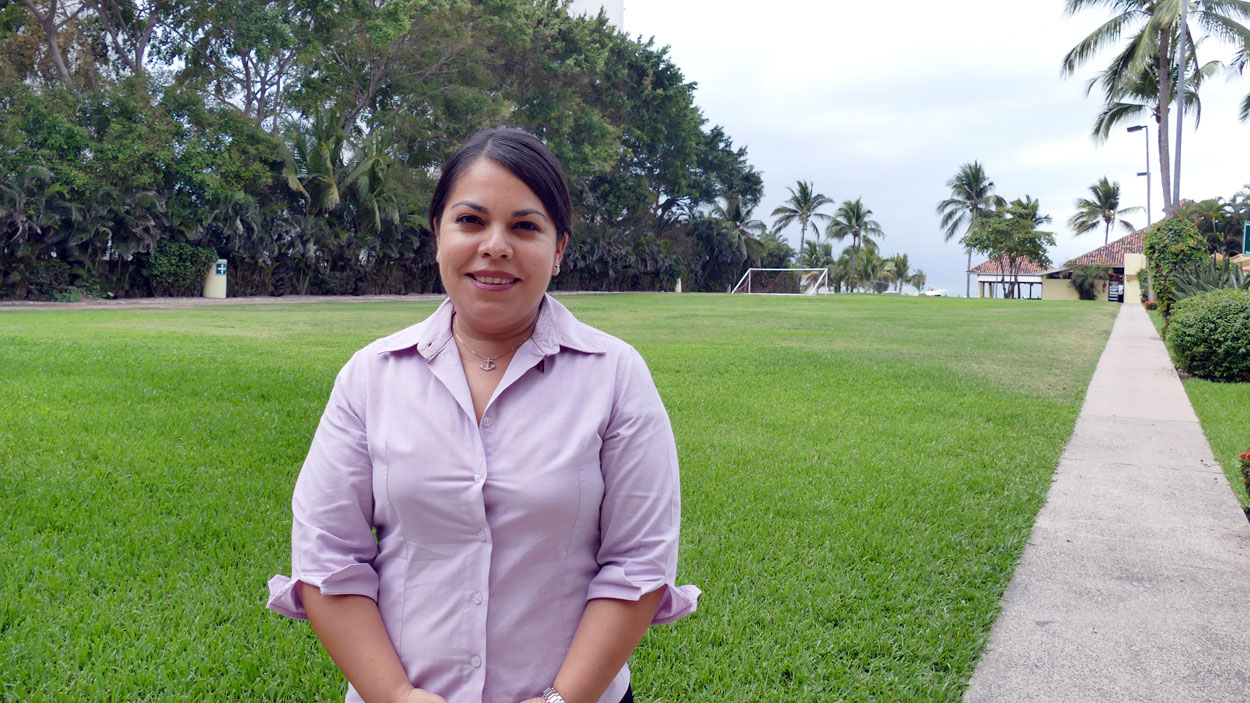 “What is truly important here is to enjoy the one-of-a-kind opportunity to connect with some of the region’s most important charitable organizations, and get involved with them in the future, keeping the culture of giving alive and well in Puerto Vallarta.” — Lourdes Bizarro, organizer

This year’s Altruism Festival will take place at the CasaMagna Marriott Puerto Vallarta Resort & Spa on Sunday, May 8, at 6 pm. Tickets are $400 pesos per person ($500 at the door) can be obtained in advance directly from the organizations, or at the Marriott’s Concierge Desk. Connect with the Altruism Festival online on Facebook.