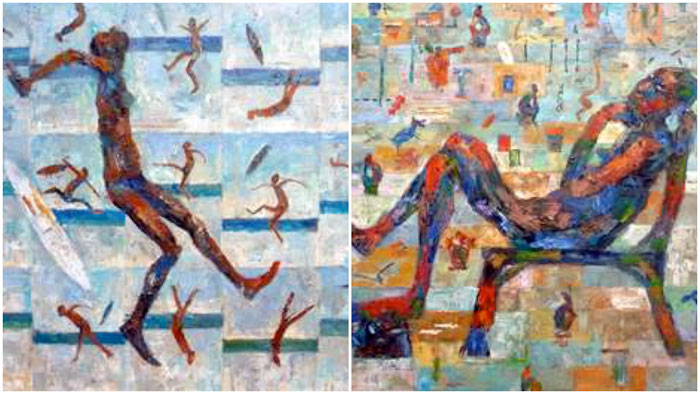 Alfredo Langarica of Guadalajara will exhibit his newest paintings at Galeria Pacifico during the Wednesday Art Walk in Puerto Vallarta’s El Centro neighborhood on February 3. The artist will be present during the inaugural cocktail reception from 6-10 PM, and the exhibition will be mounted until February 23rd.

Langarica’s paintings range from the abstract to the highly figurative, with his sense of humor often evident in the latter work. One of his paintings is divided into 15 different scenes of surfers in the process falling off their boards in highly animated ways, for example.

Alfredo has participated in several museum exhibits in Mexico during his thirty year career and is considered one of the best known and most highly collected artists in Guadalajara, Mexico’s second largest city with upwards of seven million residents in the metropolitan area.

This will be the 50 year old painter’s twelfth show at Galeria Pacifico, where his work has been collected by many visitors to Vallarta from several countries in Europe as well as the US, Canada and Mexico. Alfredo has also resided in Puerto Vallarta for a couple of extended periods during his career, and his great, great uncle was the first mayor of this city, with a street named after him, Calle Jesus Langarica, a block north of the Malecon.

This celebration is a special tribute to raicilla, one of the ancient spirits of Mexico, produced in the West...
Estefanía Montes
130 views
Events