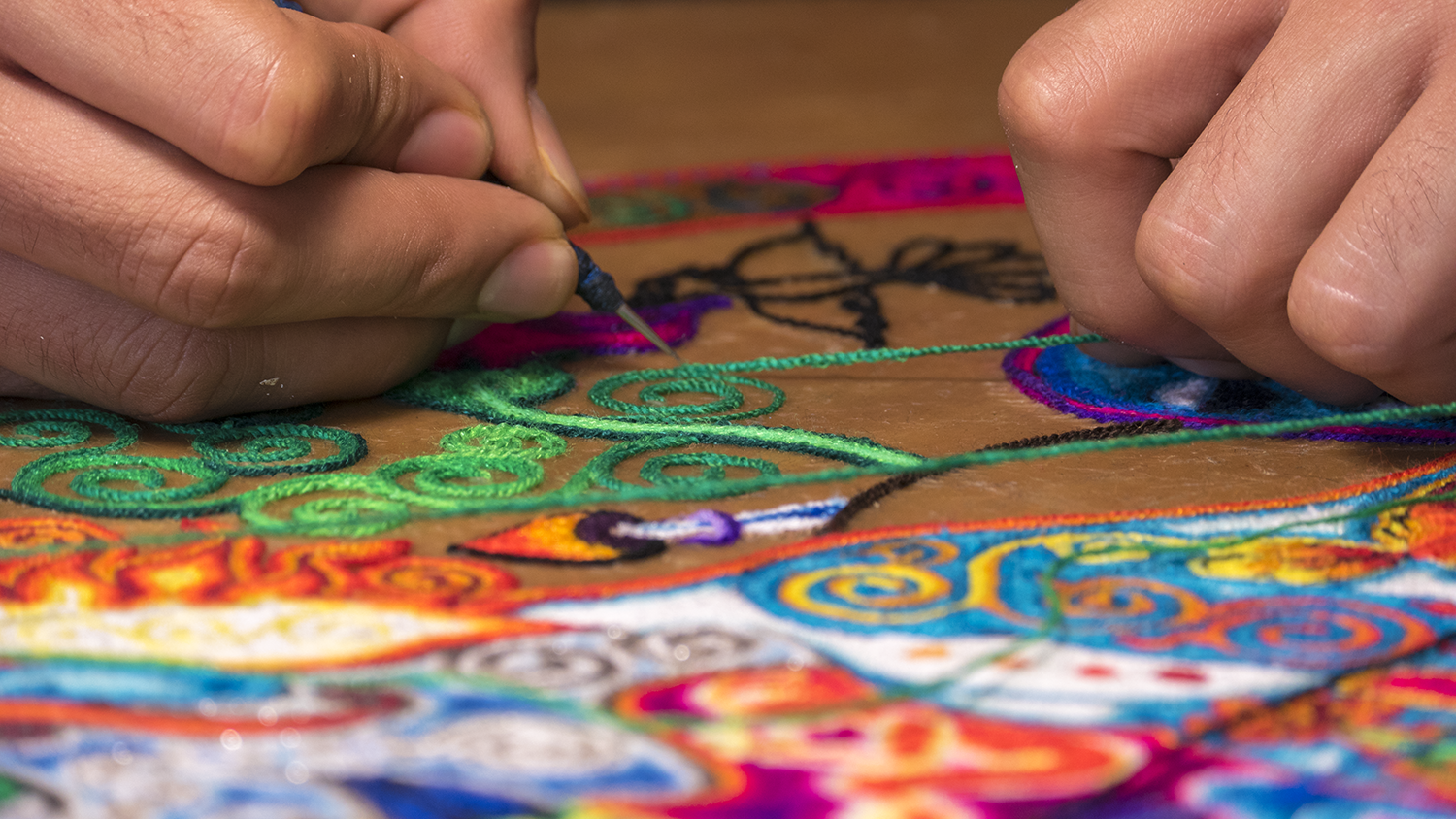 We met Cilau Valadez at his workshop in Sayulita a few months ago. At the time, he had just returned home after having attended the Foro Internacional Vitrina Turistica—an international tourism summit in which Mexico was showcased—in Bogota, Columbia. We were lucky to find him, considering he keeps a busy schedule and spends most of the year abroad. He was working against the clock on a painting when we arrived at his Sayulita workspace. “The owners of this piece have been waiting two years for it, so you can imagine the amount of work I have right now. And It just continues to increase,” he said. 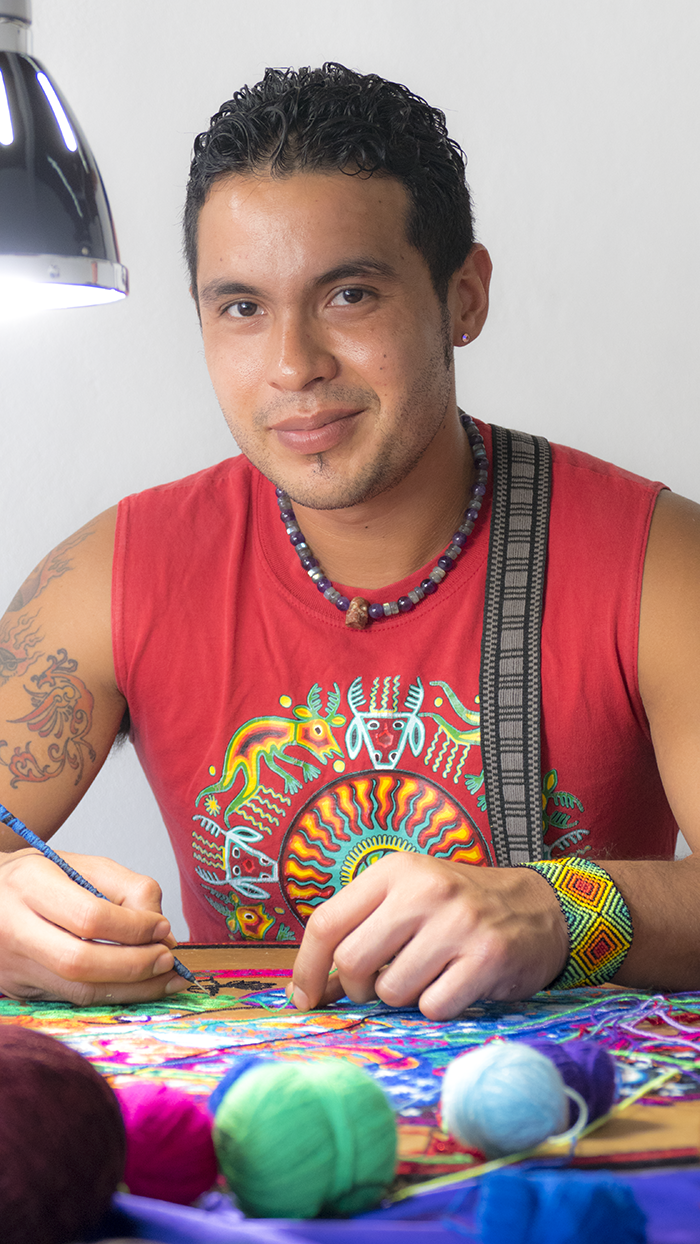 Cilau is a 28-year old Huichol yarn painter originally from Santiago Ixcuintla, a town in Nayarit located north of Tepic. He is the son of renowned huichol artisan Mariano Valadez and American anthropologist Susana Eger Valadez, founders of The Huichol Center, a non-profit organization, and owners of Galería Tanana in Sayulita, where the family resides permanently.

Cilau was raised surrounded by the traditions, stories, culture and folklore of his ancestors, so he grew up with a deeply-rooted respect for Huichol heritage and, under the tutelage of his father, learned the art of yarn painting and the profound meaning of the symbols represented in such pieces. Since his high school graduation, Cilau has been a full-time artisan, creating unique paintings available for purchase. Thanks to his talent and commitment to promoting his culture, he has had the opportunity to showcase his art overseas. His first international exhibition was in Los Angeles at the event “Experience the Unexpected of Mexico” by National Geographic Traveler’s Magazine. Since then, Cilau has displayed his art in over 100 exhibitions in the United States, 27 in Europe and five in Asia.

Over the past year, Cilau has attended different international tourism events as Cultural Ambassador of Riviera Nayarit, in order to promote the Huichol culture and the aforementioned destination all over the world: “I cannot promote my culture without promoting Riviera Nayarit. People constantly ask where my creations are made,” he says.

Even though these experiences have been possible thanks in part to the support of government organizations such as the Secretariat of Tourism and the Riviera Nayarit Convention and Visitors Bureau, he explains this is a labor that he does selflessly:

It is with great pride that I represent the state of Nayarit and its coastline. Through our art, we not only preserve our traditions and culture, but we also have the great honor of sharing them with the world. This is the only motivation I have, because I don’t receive any payment and don’t have this expectation either.

To create his beautiful works of art, Cilau begins with a wooden base that is covered with beeswax and pine resin. This surface is then lined with yarn in different colors, creating the desired images. Before painting, however, artisans have to purify their soul by saying a prayer. Afterwards, they enter a meditative state of trance, allowing them to visualize design patterns and colors for the painting, he explains. Even though this technique dates back hundreds of years, it was not officially recognized as a Mexican popular art until 1950.

Work in progress of a painting by the huichol artisan.

“This is a writing system. In the same way Mayas and Aztecs had their own writing methods, we have this one, based on symbols and colors with a deep meaning for our community. This is a way to preserve our stories and beliefs”

Last year, Cilau spend almost 300 days of the year abroad. Among the countries he visited are Spain, Columbia, England, Malaysia, Kyrgyzstan and Czech Republic. While he enjoys traveling and sharing his culture through his unique works of art, he also confesses that he is frequently homesick:

“I represent the place where I come from because I love this area, I love the tradition and culture of my region. It is true that I travel a lot, that’s what an ambassador has to do, but I also love being home. After travelling to all those countries, one can realize how lucky we are to live here,” he concludes.

Follow the travels of Cilau Valadez, admire his latest works and get to know his accomplishments as ambassador of Riviera Nayarit by following him on his social media accounts:

The Huichol Culture—also known as Wixarika Culture—is a community of native Mexicans living in the Sierra Madre Mountains in the states of Nayarit, Jalisco, Zacatecas and Durango. They are said to be the last tribe in North America to have maintained their pre-Columbian traditions. Huichol crafts are well known in Mexico due their colorful presentation, featuring nature elements related to their beliefs such as the sun, the moon, labyrinths, trees, spirals, mountains and cosmic oceans.