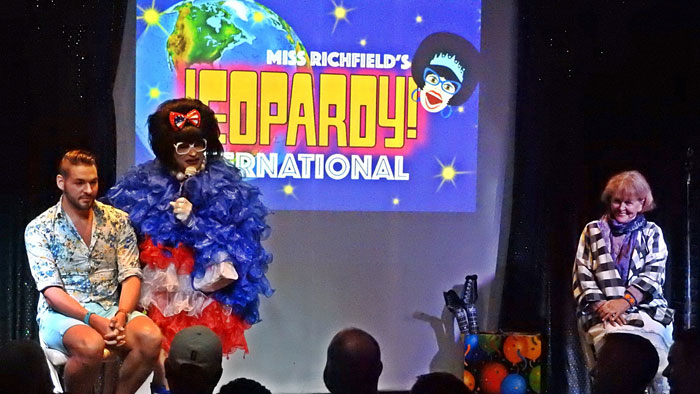 Now in her third season at The Palm, the hilarious Midwestern maven, Miss Richfield 1981 stars in her all new show, Red Lips To The White House. Miss R. is kicking off her US Presidential campaign in Mexico. Proving she will be the best, ‘Commander in Chiffon,’ she will lay out her platform with all new songs, videos, and even more fun audience interaction, inviting all to join her campaign #BigHairMatters!

Miss R.’s all-live performances have received critical acclaim with The New York Post declaring Miss Richfield 1981, “The must-see act in Provincetown.” And The Chicago Sun-Times describes Miss Richfield as “Garrison Keillor meets Mary Tyler Moore”. In addition to selling out theaters and nightclubs each year in New York, Chicago, San Francisco, Philadelphia, Atlanta, South Florida, and Minneapolis, Miss R. continues to fill the Paramount Theater at the Crown & Anchor in Provincetown, MA nightly, throughout the summer. Her debut two seasons ago at The Palm Cabaret and Bar in Puerto Vallarta was a huge success and PV has been in love with her ever since.

Miss Richfield’s national appeal includes riotous appearances on “The Tonight Show with Jay Leno”, “Today” on NBC, “Cake Boss” on TLC, and, most recently, as a television spokesperson for Orbitz, Atlantis Events, and the City of Philadelphia.

Performances of ‘Red Lips to The White House’ at The Palm begin  Feb. 2 -15. Big crowds are again anticipated this season, so please reserve early (See link below).

Now Playing at The Palm

Well-Strung, the hunky and talented string quartet, is now playing their popular blend of classical strings and pop hits in ‘Summer Lovin’ through Feb. 19. Bohemia Viva continues to soar in popularity with their own show featuring sizzling Latin rhythms and beautiful harmonies. Next show Feb. 13 at 7pm. Kim Kuzma and her ‘Acústico’ live band, with their original Latin and pop “mash-ups”, plays every Wed. & Sun. at 7pm all season. And Miss Conception recently debuted her all-new extravaganza ‘Miss Conception Goes To The Movies’ to rave reviews and sold-out houses. She plays Mondays and Thursdays at 9:30pm.  Reservations are suggested.

The Palm is well-known for bringing top notch, cutting-edge entertainment to Vallarta. Inside you’ll find an intimate, completely refurbished 90-seat cabaret with outstanding sound and lighting, creating the ambiance of cabarets from days gone by. Shows are scheduled seven days per week with two different shows nightly through early April, 2016. The Palm also offers matinees at 4:00 p.m. on selected shows.

The Palm is non-smoking (a patio is provided for smokers) and is located at Olas Altas 508, in Colonia Emiliano Zapata. A full calendar of performances, information and online tickets are available at www.ThePalmPV.com.

You can see upon entering the community that it is a very traditional setting, but you truly recognize its...
Alexis Velasco
380 views
Specials

Through an Instagram video, “The Real Housewives of Orange County” star shared the news while filming...
Jorge Chávez
1,278 views
People

Leonardo Uribe
General manager
Arq-Espacio
“We started to advertise 7 or 8 years ago and certainly it has helped us position our brand. Now that we have improved a lot in quality, processes and finished products, our marketing in the magazine is precisely to strengthen the leadership we have earned through the 13 years in the area. I also think that we also have grown with the advertisement and that it has been done and it has helped us get to where we are now.”
Vallarta Lifestyles Picks