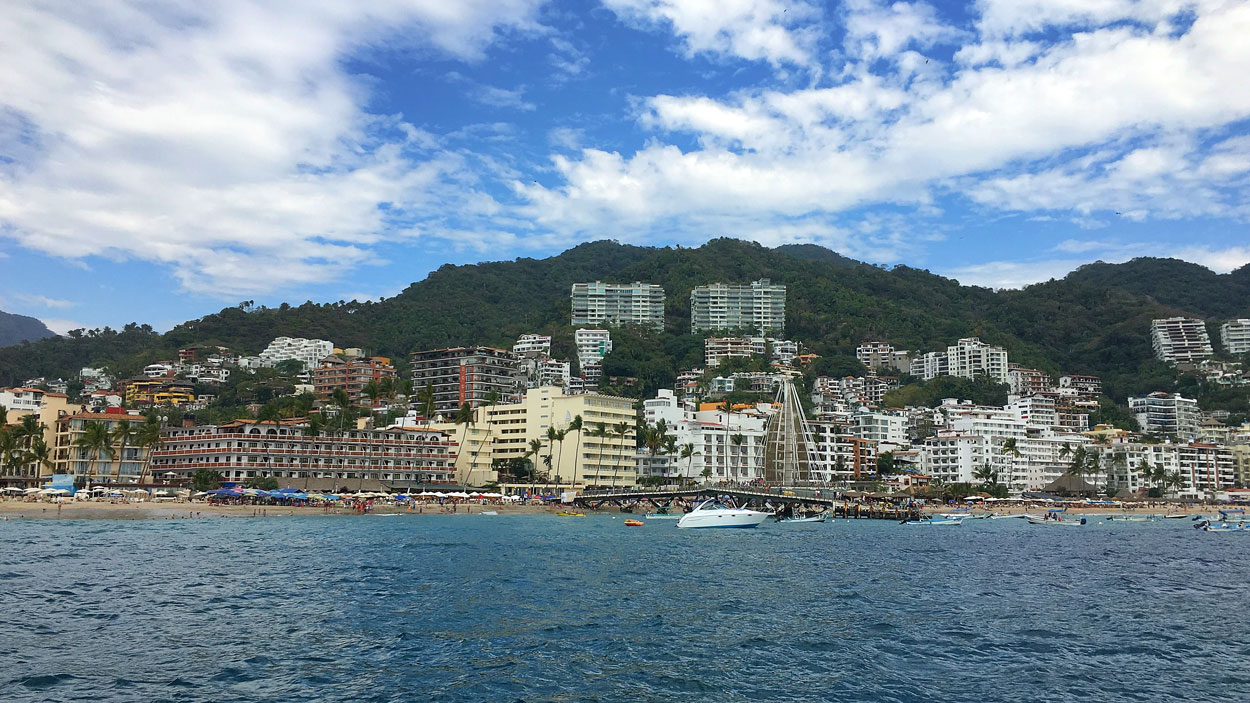 Founded in 1999, the Amapas Neighborhood Association (ANA) represents residents and business owners in the Amapas neighborhood of Puerto Vallarta. Get to know one of our city’s most dynamic neighborhood association through recent accomplishments and a forthcoming event nobody should miss.

As you head south toward Mismaloya or other points south along Carr. 200, you may not even notice a small brick casita on the left-hand side of the road, next to the second access to Conchas Chinas. If you are simply driving by, it may not mean much to you. But for folks living or vacationing in its immediate surroundings, it may very well mean the difference between life and death. Owned by the city of Puerto Vallarta, the structure had been used primarily as storage space until recently, and was deteriorating due to neglect and lack of maintenance. The possibility of improving it, however, became a perfect opportunity for the Amapas Neighborhood Association to get involved.

Organized as both a non-profit association and also as a Junta Vecinal (the official designation that Mexican law uses for this type of organization), the Amapas Neighborhood Association (ANA) has a solid membership of residents and business owners in Amapas, the mostly-residential neighborhood nestled between Emiliano Zapata and Conchas Chinas, focusing on four specific areas of concern:

Sometime last year, City Hall officials approached the ANA expressing interest in upgrading the brick casita and setting it up as a sub-headquarters for 24/7 emergency services in the southern part of town, including police and ambulance equipment and crews. Thanks to a series of fundraising efforts, the ANA was able to raise approximately $9,000 USD to equip and furnish the place with furniture, couches, a working kitchen and sink, a refrigerator and two bunkbeds with linens. 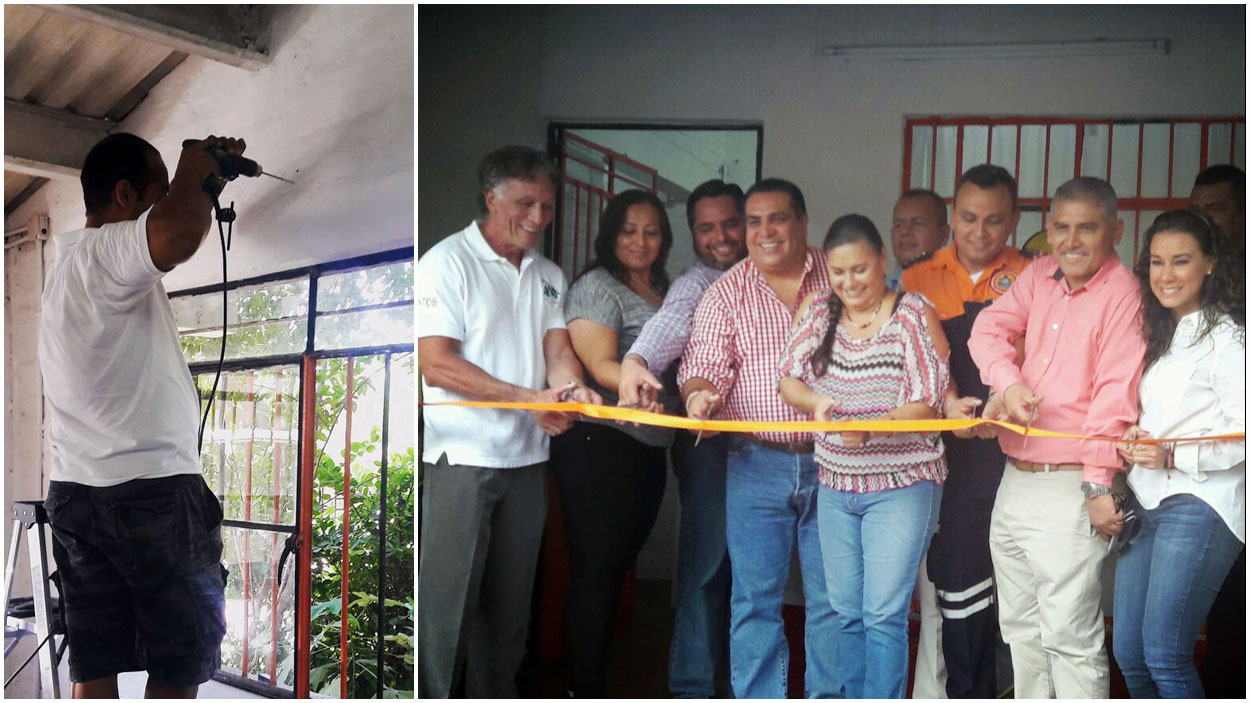 What does this mean? Basically, the substation decreases emergency response time by up to 20 minutes for everybody from Amapas all the way south to Boca de Tomatlán. “This is now the epicenter of emergency services for the South Side,” commented ANA President, Tom Swale.

Adrián Bobadilla García, commander of firefighters and emergency services in Puerto Vallarta, chimed in: “We want to be close to people for risk management, and to minimize response times in an emergency. A heart attack, for example, becomes a very complicated matter after a little as seven minutes. With this substation (known as Base de Conchas Chinas), we can reach just about any point south of the Río Cuale all the way to Boca de Tomatlán very quickly.” 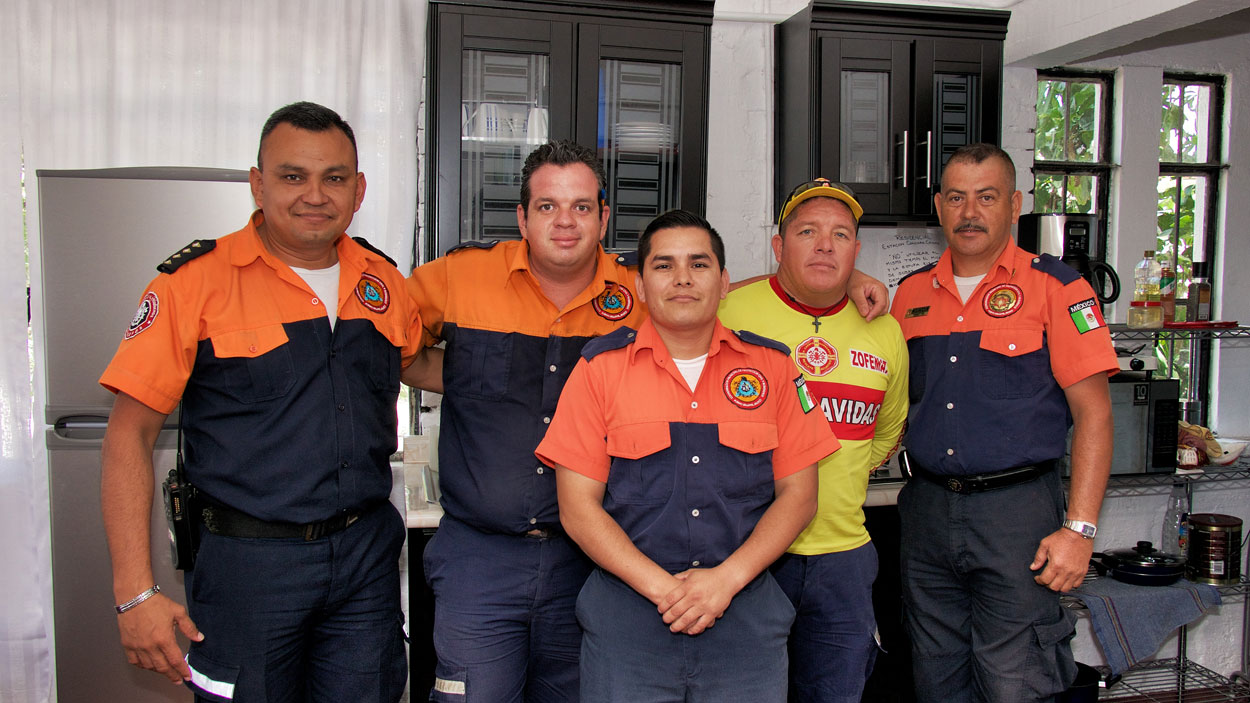 A comfortable environment with amenities allows the team to be ready at all times in case of an emergency.

Puerto Vallarta’s emergency services (Protección Civil y Bomberos de Vallarta) include their headquarters, located in Colonia Lázaro Cárdenas near the municipal stadium, plus additional substations in Colonia Gaviotas (for ambulances); Joyas del Pedregal, behind Pitillal, and the newly-refurbished Base de Conchas Chinas. A 411 emergency number is yet to be implemented in the city. However, the number to dial, in case of an emergency, is 066.

It’s exciting to think that we are on the verge of doing something really major for the neighborhood. —Tom Swale, President

Presently in the works for ANA, a huge campaign that netted $200 thousand MX from neighbors in Gardenias and Hortencias streets will be used to repave a portion of Hortencias. “It’s exciting to think that we are on the verge of doing something really major for the neighborhood,” added Tom. In addition, the ANA has been holding productive meetings with City Officials to create an improvement plan for the Carr. 200 highway, which divides the neighborhood in two and is presently, for the most part, devoid of sidewalks. Construction of safe sidewalks along the highway would be a welcome addition for area residents and workers, or for anybody looking to explore this side of town by foot. 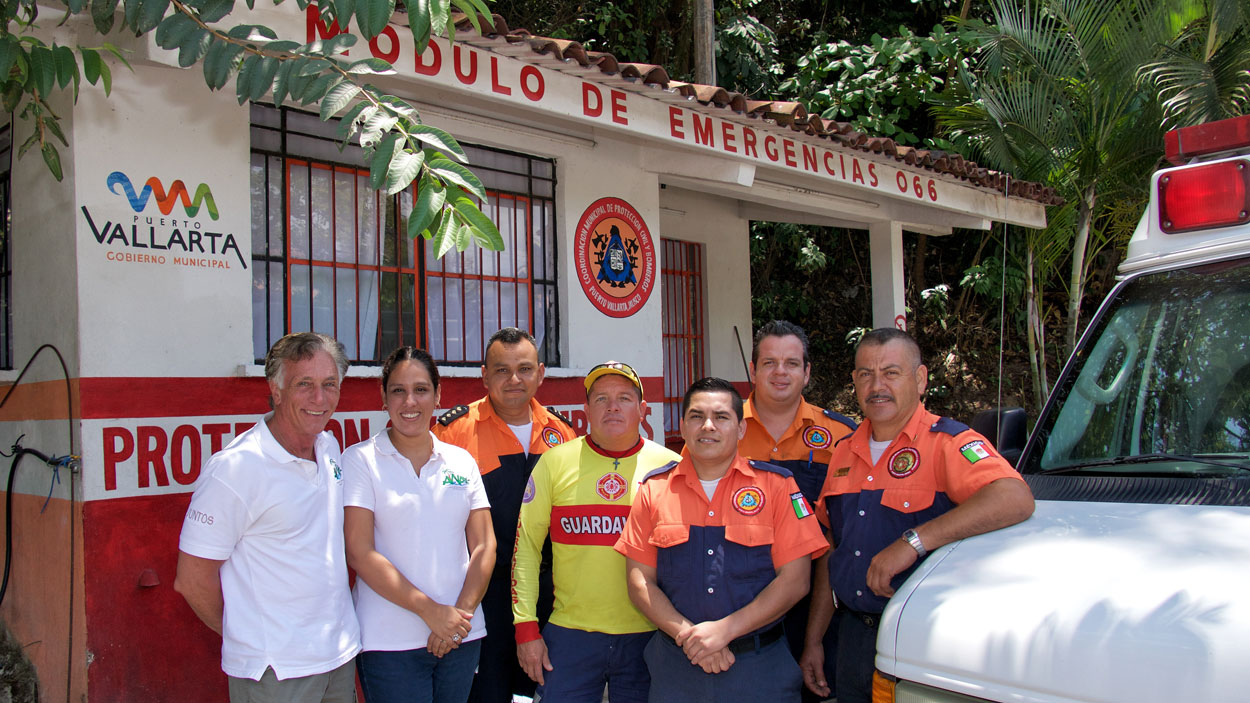 Tom Swayle, president, and Viviana Testón, administrator, of ANA, with Commander Bobadilla and part of his response team.

As part of their neighborhood identity community building strategy, the ANA devised a zany outdoor event two years ago to take place along Amapas and surrounding streets: The Púlpito Drag Derby. A competition of sorts, the unique event encourages local female impersonators (or any gents that happen to feel comfortable in drag and high heels) to sign up and race one another from one business along the street to the next, completing a plethora of absurd tasks. In heels, gowns and makeup. In a hurry.

The freshman Drag Derby took place on May 22, 2014, complementing Puerto Vallarta’s pride festivities, and it was a huge hit among residents and tourists that gathered on the street to watch the contestants and their antics. And while the event is not a huge fundraiser for the ANA when compared to other efforts, it provided the neighborhood with a sense of identity, and the intersection at Púlpito and Olas Altas Streets was subsequently enhanced with planters and other cosmetic improvements, becoming a focal point for bars and restaurants in the area.

The sophomore Drag Derby took place on May 21, 2015, attracting more participants, larger crowds, a variety of live entertainers and more substantial prizes for the contestants. ANA shared event profits with SETAC, a local community center founded in 2009 to create bonds of protection for people living with HIV / AIDS in Puerto Vallarta, regardless of gender, religion or social status.

This year’s Púlpito Drag Derby will take place on May 26, starting at 6 pm. The event will feature a wet t-shirt contest for men and will be hosted by Comedy Central stand-up comedian, Hugo Blanquet. Don’t forget your wallet to bet on your favorite contestant, and of course, don’t forget your camera!

The Amapas Neighborhood Association remains one of the best structured neighborhood associations in Puerto Vallarta and all of Banderas Bay. Since their outreach extends beyond the neighborhood itself, President Tom Swale did not hesitate to encourage as many people as possible to get involved. “You don’t have to be an Amapas resident to support our goals and projects.” Those interested in membership, fundraising or volunteering opportunities, or simply wish to get to know one of Puerto Vallarta’s most beautiful residential neighborhoods, can connect with the ANA through their webpage.