Hike to the Top of Cerro del Mono 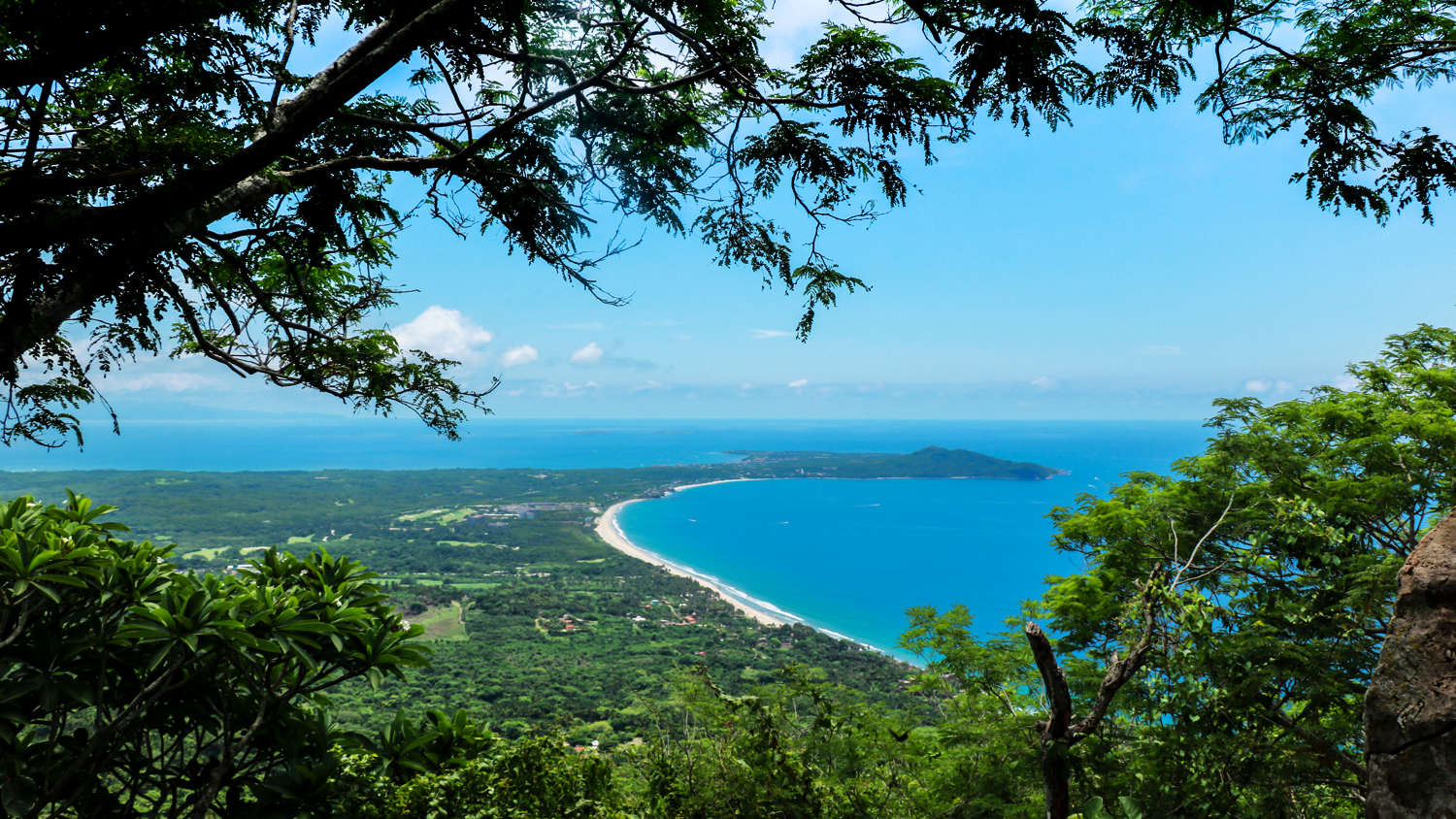 The landscape of Vallarta · Nayarit is made up of extraordinary natural attractions. Probably, one of the most emblematic characteristics of the region—one that visitors from all over the world have fallen in love with—is the juxtaposition of mountain and coast. Undoubtedly, the combination of the beautiful blue tones of the sea with the resplendent green of the jungle gives both destinations a special charm. In addition, this attribute allows for the bay’s diverse recreation options, as one day we can enjoy the beach and the next venture into the jungle, which guarantees unparalleled panoramic views. With this in mind, we propose an adventurous activity to complement your vacation experience once you have enjoyed the sun, sand and sea. It should be noted that it requires good physical condition and being open to walking on uneven paths and in full contact with the vegetation.

Cerro del Mono is located to the north of Banderas Bay, in the vicinity of the Higuera Blanca community. It is a summit that, during recent months, has gained popularity as a hiking route among the region’s residents and visitors, especially those in the Punta de Mita and Sayulita areas. It is a mountain approximately 1,150 feet high, from which you can appreciate the beauty of the Pacific in all its splendor. Although there are tour operators with expert guides to take you to the top. Although the activity proved exhausting, the reward was worth the effort. 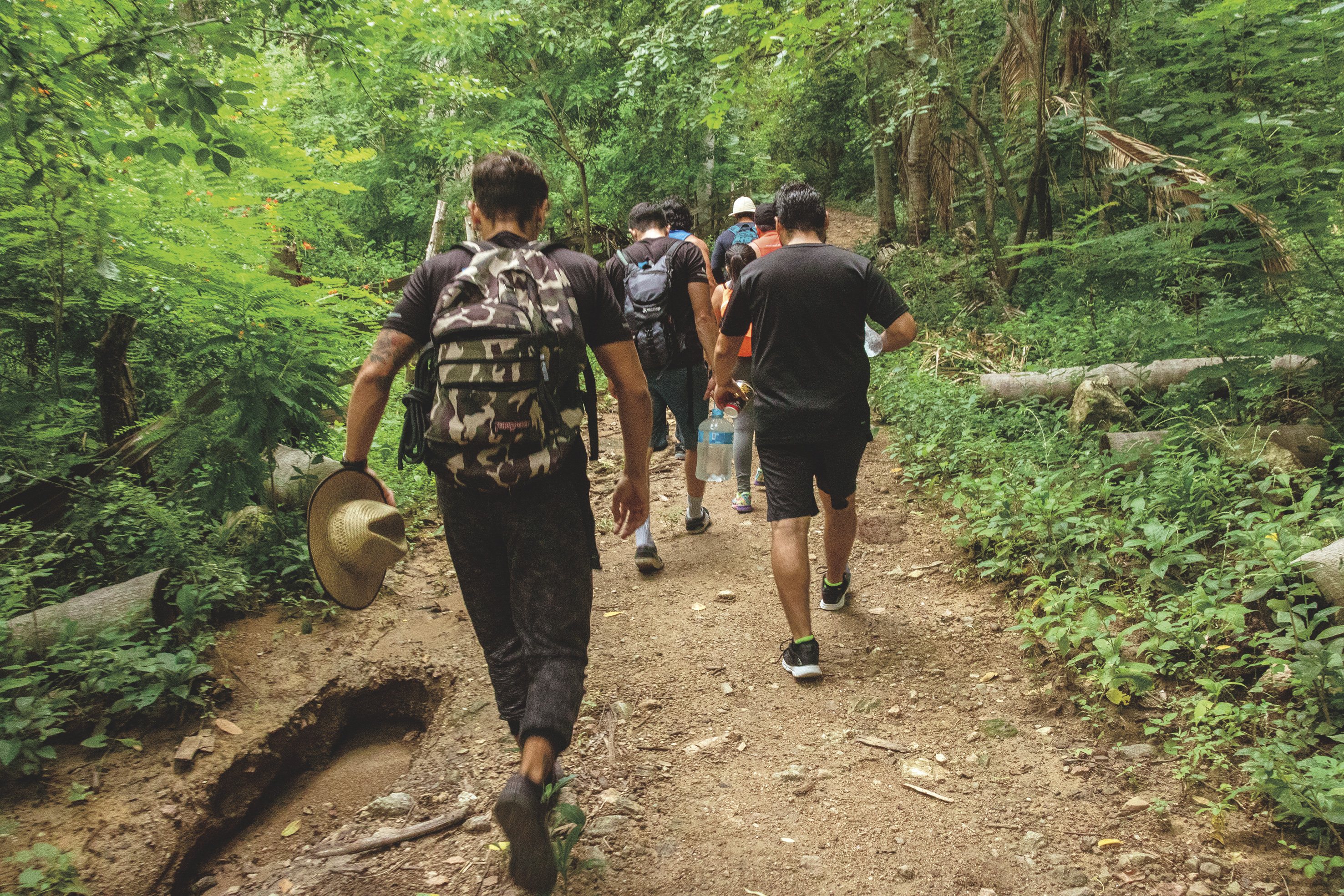 From Puerto Vallarta, the most convenient way to get to the town of Higuera Blanca is by car via Highway 200, heading north. Taking the route toward Punta de Mita, shortly before arriving there, turn off toward Litibu Beach. Approximately 10 minutes from that point, there is access to Higuera Blanca, a small town next to the road.

An alternative way to get there from Puerto Vallarta is via the Autotransportes Medina buses (Punta de Mita/Higuera Blanca route) that leave from the stop by the Walmart located on Francisco Medina Ascencio Avenue, across from the Maritime Terminal.

After parking the car, we walked to the main square, adorned with a kiosko and near a convenience store where we purchased water and fruit, to recharge during the hike. Upon obtaining our provisions, we began walking along Juan Escutia Street (beside the plaza), a cobblestone street lined with houses typical of the area. Shortly, we came to the beginning of a dirt trail, which we continued along. From this point and along the way, we observed arrows marked with “Cerro del Mono,” which confirmed we were on the right track.

As we advanced, we encountered an increasingly irregular landscape, surrounded by the characteristic vegetation of the low deciduous forest, with trees such as papelillo (paper bark tree), fig, coconut oil palm and capomo (bread nut tree). The atmosphere of the site is very special and is accompanied by the unique sound of the birds.

After walking for approximately 10 minutes without seeing any sign of buildings, we left the path and found a paved street. Here, we turned to the right, following the route marked by a sign. This section is very distinctive, as the road is surrounded by tall fig trees, which provide shade and a beautiful setting. Soon after, we came across a wooden fence, which was open. An arrow indicated that we had to enter there to begin climbing Cerro del Mono. In effect, this is where the slope begins, so the physical effort began to intensify step by step. 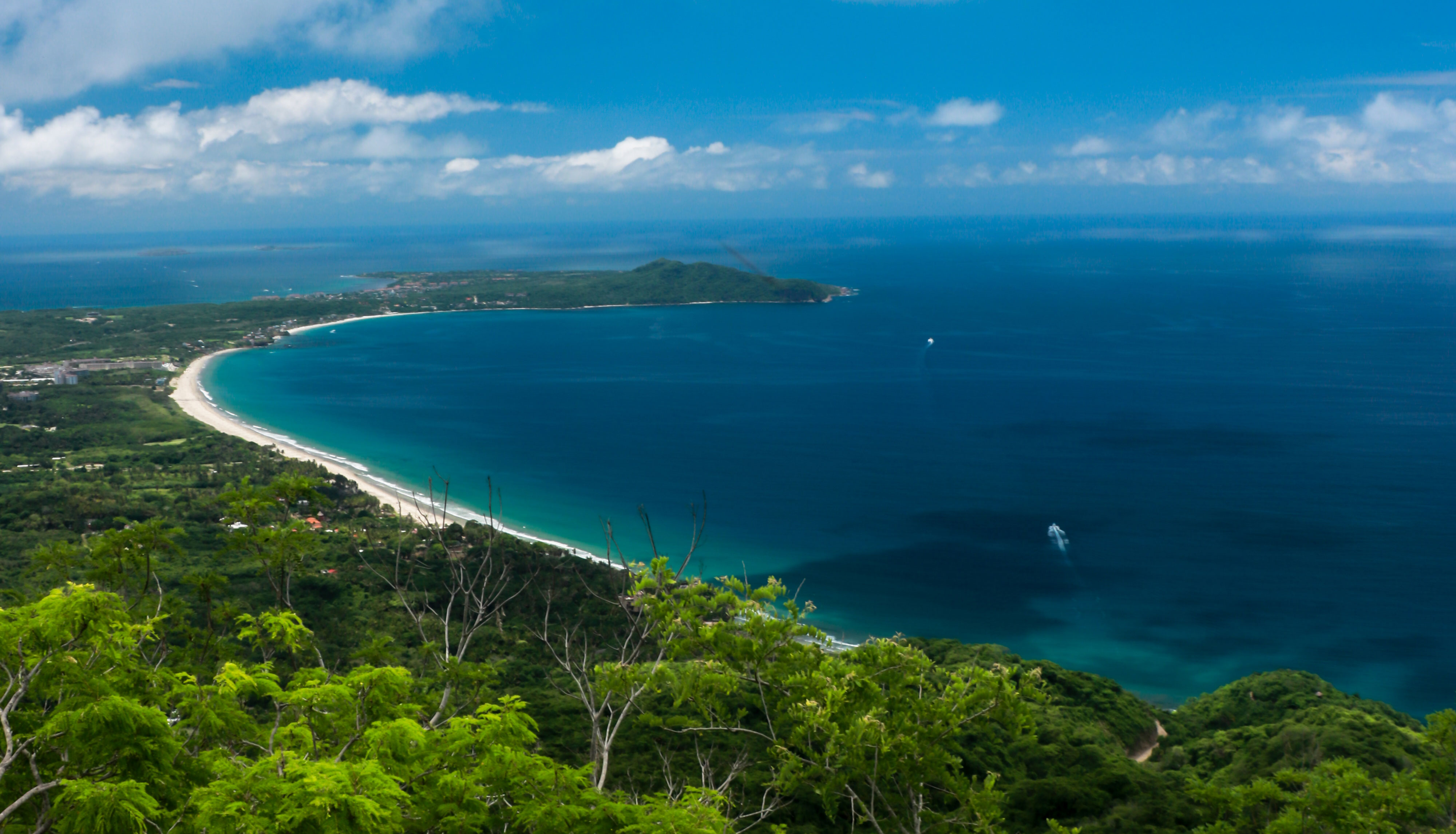 Although there are several theories regarding the origin of Cerro del Mono’s name, according to the inhabitants of Higuera Blanca, it received this name because a number of totems depicting primates were found in the area. It is presumed that the objects belonged to the tribes that inhabited the region long ago. Another version states that were monkeys inhabited the area previously. However, none of these stories has been documented or officially endorsed.

From the wood fence to the top of Cerro del Mono, the hike takes approximately 40 minutes at an easy pace. At some points, you can enjoy views of the ocean and take a break, hydrate and eat a light snack.

Although the trail is very well defined and signposted, in general, near the summit the terrain becomes very rocky, so we suggest caution when holding on to or climbing on the stones. Fortunately, at no time is it necessary to climb or scramble, so just take a little care to reach the top.

At the top of Cerro del Mono consists of a kind of lookout with a 360-degree view. It is a wide space, with an irregular surface and many rocks where hikers can sit to admire the horizon, also providing trees that offer shade. In addition, the breeze blows freely and embraces each of the adventurers appreciating the scenery.

From on high, you can contemplate the greenery and beauty of the northern part of Banderas Bay, the majesty of the peninsula on which Punta Mita is located, the Marietas Islands, Litibu Beach, Sayulita and some unspoiled beaches that are hidden because of their geographic location. Also, you can see the boats that navigate the waters of Riviera Nayarit, the rise and fall of the waves and the marine currents. It is a place that takes the breath away, providing a sense of grandeur, a place where you want to spend as much time as possible. The highest point is a large rock, on which visitors take group photographs and selfies in all directions. 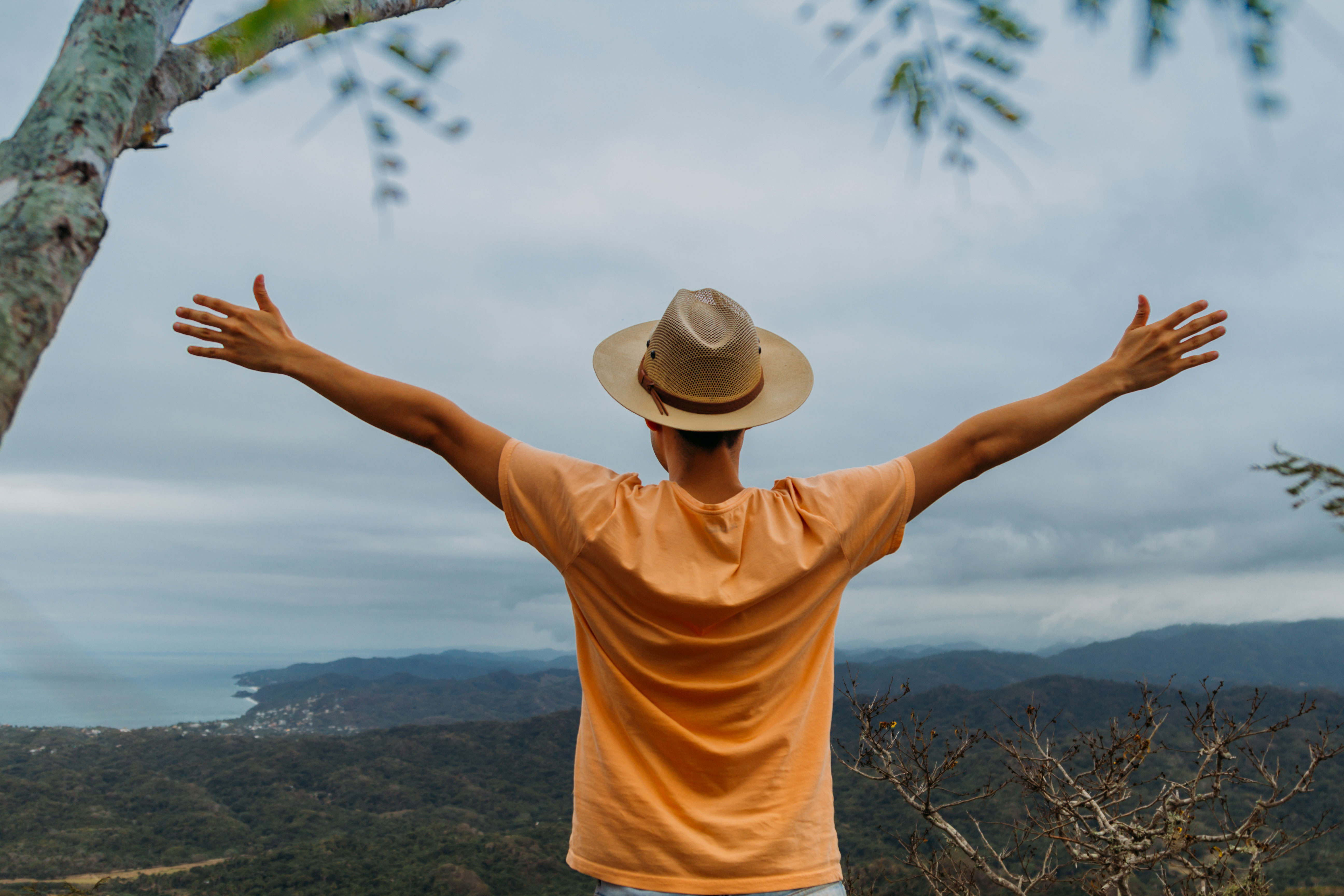 After enjoying the panoramic view from Cerro del Mono for almost an hour, we undertook the return trip to Higuera Blanca. Following the same route, it took approximately an hour and 15 minutes to reach the town square. Satisfied with the excursion, we decided to continue the day in Punta de Mita, where we had lunch and rested after the long walk.

If you go on this adventure in the morning, you can take advantage of the proximity of beaches such as Sayulita and Litibu, spending the afternoon resting in the tranquility of the coast, relaxing and watching the sunset on the beach the best way to end a very vigorous day.

· Take an extra change of clothes

· Go during the day, preferably accompanied

Tours and Excursions with Guides

Puerto Vallarta has become one of Mexico’s most attractive beach destinations, offering something for...
Jorge Chávez
347 views
Activities

Basilio Badillo and Surroundings: A Tour of 5 Art Galleries

One of the things that most excites art lovers when they stroll through the Romantic Zone is the variety of...
Jorge Chávez
526 views
Art & Galleries